Retired Nottingham head teacher Christine Johnson was today the guest of honour at a reception hosted at the Beeston, Nottinghamshire, factory of SMS Electronics Ltd, where the ZX Vega is being manufactured. Now a sprightly 85 year-old, Christine was head teacher at Neatherfield Primary School in the 1980s, and started coding classes for the children at her school, some of them as young as five. Christine taught Spectrum BASIC in her classes and was co-author of the book “Educational Uses of the ZX Spectrum”, which was published in 1983 by Sinclair Browne. 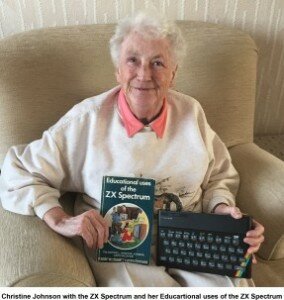 Christine set up an after school computer club where the pupils could use the school’s Spectrum computers to learn BASIC programming. This prompted her to look for literature written specially for schools but she wasn’t able to find any, so she wrote her own lessons and coding guides for her pupils, including several example programs to show her pupils how to code. Then she was invited to collaborate on the book.

“I had already written a few guides for my pupils so was thrilled to transfer this information in to a book for other children to use. It was so exciting to actually see it in print in W H Smiths around the country”.